Tech in wood joinery meets handcrafted design + build. Top is a mortising unit, below is a micro-adjust created using traditional methods. The story follows. I purchased this Jessem Mortise Mill unit a few years back and although I managed to produce some loose tenon slots successfully, it was not easy to set up. I can’t recall the issues exactly, but I was frustrated at times. So recently found the unit buried under a secondary workbench and decided I would make an effort at getting it to work successfully. I had always wanted a horizontal slot mortiser setup and thought why not set this up to create slots in the horizontal plane instead of the vertical plane. The unit was marketed to be installed vertically with board placement underneath. Notice the etchings on the Mill are upside down. I’m not sure if having boards hang below the unit contributed to the issues I had at the time, but nonetheless I wanted to mount it so loose tenon slots were created horizontally. First pic is before building the micro-adjust unit. 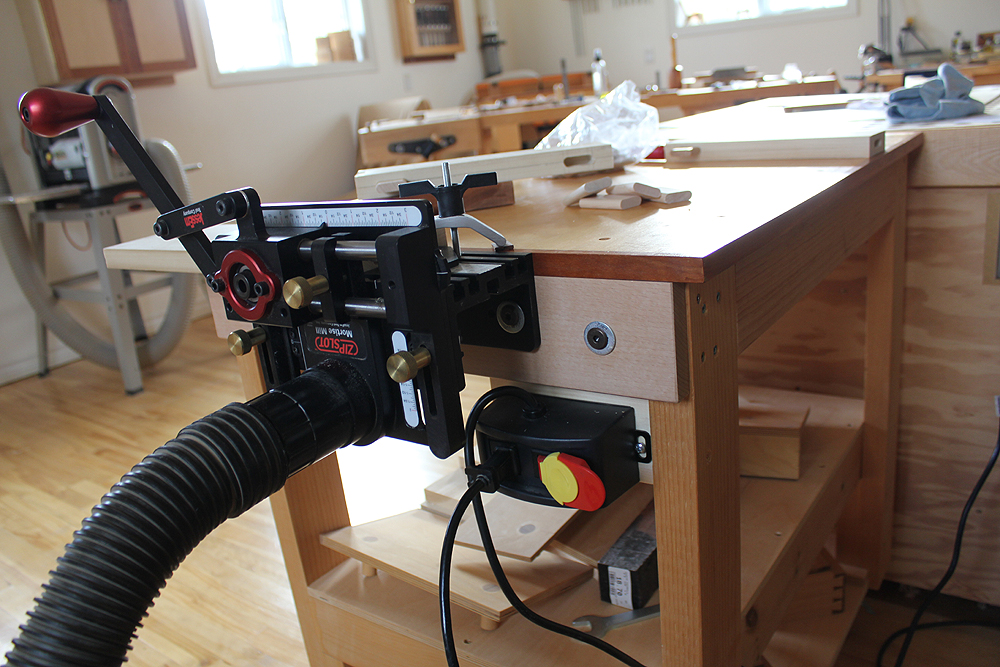 Next step was to find a suitable platform, i.e. workbench surface to be able to mount it. A rolling cart in my workshop was ideal since I could wheel the unit away when not in use and the footprint of the Mortise Mill was not large. The rolling cart has large locking casters which do a good job of keeping the cart immobile. Installed it so the surface of the base plate was even with the surface of the cart, this took some time. I used large enough 1/4-20 bolts to maintain rigidity and keep it from shifting. 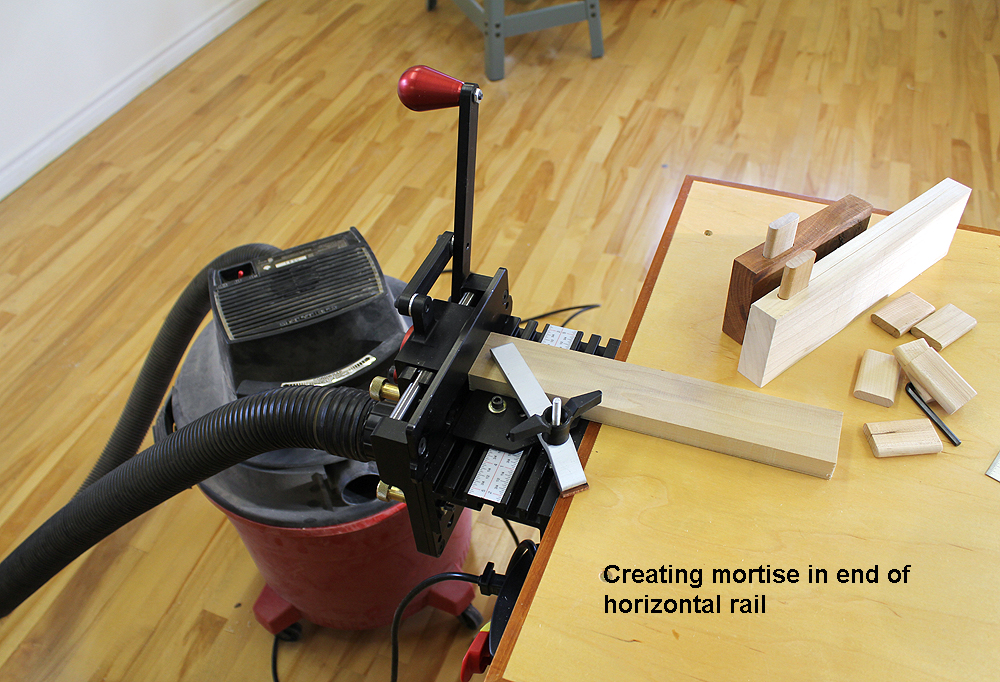 Tested it afterwards and I was pleased with the results. The later addition of a L-shaped wood bracket to support stiles while they were being mortised worked well. The ends of rails to be mortised were easily supported by the wood surface of the rolling cart. Further testing with clamping of boards provided me with a repeatable setup. I liked the fact that I could permanently leave the Mortise Mill bolted to the rolling cart. 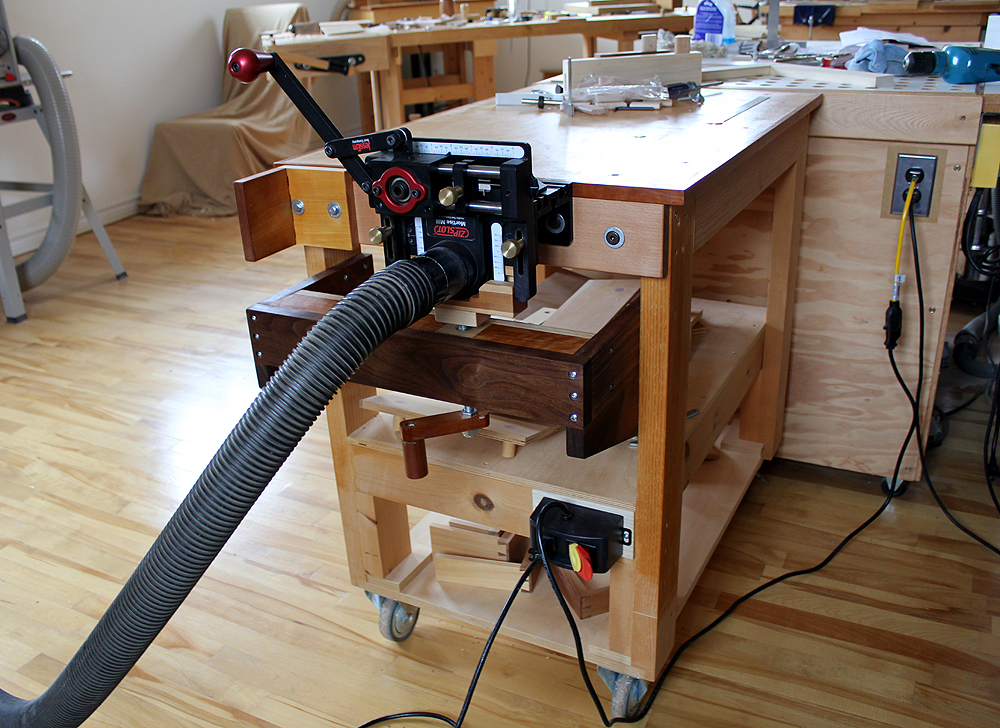 The only small issue was the vertical adjustment of the slots on a board. Since the Mortise Mill was installed horizontally, the adjustment was not as smooth as I would like due to the weight of the sliding component of the unit. I decided to make a micro-adjust setup to alleviate the problem using some scrap walnut and maple. As can be seen in the pics, it is all wood construction with a 1/2 inch lead screw and wood handle. The end of the lead screw has a custom cradle contoured to fit the bottom edge of the sliding part of the Mortise Mill. Now I can precisely dial-in slot placements! 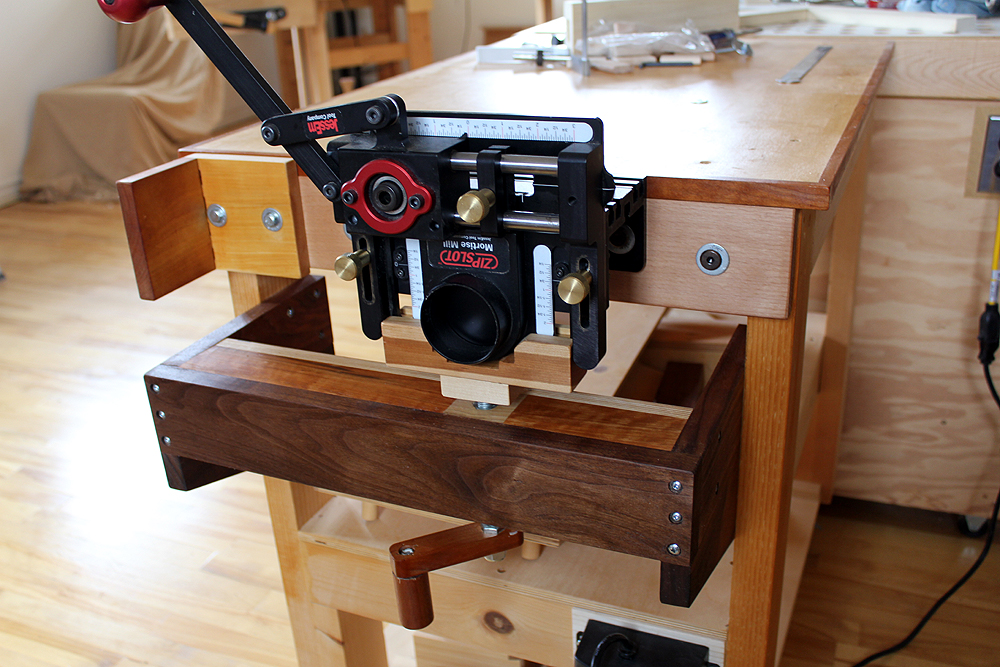 Since the micro-adjust was cantilevered off the vertical posts of the rolling cart, I beefed up the supports, it’s probably over-engineered now. Things to watch are the exact placement of the tip of the lead screw over the center of the edge of the Mortise Mill for smooth operation. A large paddle switch for the built-in Mortise Mill dust collection was installed for convenient access.